Apple TV vs Roku: Which is the Best Choice 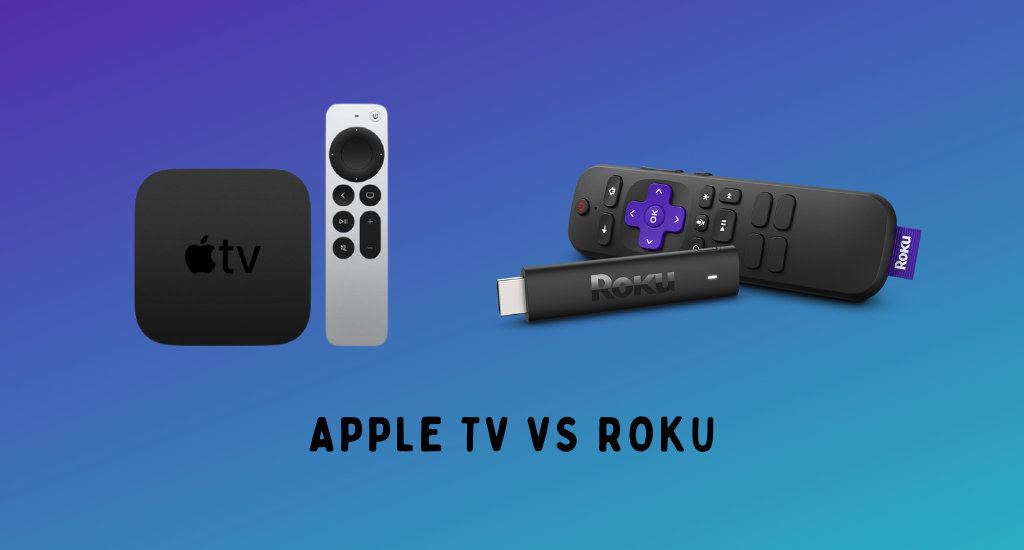 Both Apple TV and Roku are extremely impressive streaming devices in the market today. They have similar features and stunning streaming quality, including 4K and Dolby Vision. Also, you can find different models of both Roku and Apple TV devices at different price ranges. If you are looking forward to getting a new streaming device, you need to know the features of both devices. Therefore, you can find a detailed comparison of the features of the devices Apple TV vs Roku.

Let’s compare the different features of both Apple TV and Roku devices.

Roku comes with a built-in Roku Channel Store that features all the popular apps, including Netflix, Disney Plus, YouTube, and Sling TV. In the same way, your Roku supports AirPlay. You can also screen mirror content from Android and Windows devices to Roku as well. Roku has more than 1700 apps or channels in its Channel Store. You might only miss content from iTunes on Roku.

At the same time, Apple TV has a built-in App Store with a rich collection of apps. Also, you can get more content on it by screen mirroring from iOS devices and Mac. Apple TV has around 30 entertainment channels without missing the popular streaming apps.

Roku has a very simple interface that represents the apps as large tiles in a grid view. You can adjust the tiles in the grid to your choice and interest. You can see a few ads in the Roku interface as well. However, there are no recommendation tabs and posters for shows and movies on Roku. You can easily navigate through the menu and tabs on Roku. Also, the interface is super quick to respond.

Apple TV has a stylish and colorful interface with menus and tiles. Also, you can find recommendation tiles from different services. These recommendations will let you access more shows and movies on your device. You can easily navigate through the menu with the Siri remote that comes with a directional click pad.

Apple TV remotes have faced a lot of updates with each generation. It has a touch and motion-based interface, which gives you a better experience in comparison to Roku remotes. The latest Siri remote is very impressive and has Siri support. The voice feature is one of the most outshining features of the Apple TV remote.

Roku remotes also have come across a few updates over the time since their release. The Roku Voice Remote Pro has voice support. Still, the users find the Siri support on Apple devices to be more effective. Still, Roku has support for Google Assistant and Alexa. The Roku remote is easier to use and can be customized based on your streaming necessities. One of the most attractive features of the Roku remote is the headphone jack that gives you the private listening feature.

Apart from that, you can control both Apple TV and Roku using smartphones. The Apple TV remote app has support for iPhones and iPads. At the same time, you can access the Roku remote app on both Android and iOS devices to control your device.

Apple TV 4K and Roku Ultra are the most popular devices in the market. Following are the comparison of their features.

Both Apple TV and Roku have the best streaming quality. Both the devices come with 4K HDR streaming quality on all supported apps. In addition, you can get both Dolby Atmos and Dolby Vision support on these devices. Apple TV includes popular Apple services like Apple Music, Apple Fitness, and Apple Arcade. Also, you can calibrate the Apple TV picture using an iPhone.

Which Is Better Apple TV Or Roku

After comparing both the devices, you can understand that both of them have similar features and functions. Apple TV has the best features in comparison to Roku devices. At the same time, Roku might be a bit more affordable. The choice for the better device is all up to you to make.

1. Is Apple TV or Roku better?

Both Apple TV and Roku are impressive streaming devices with great features and streaming quality. However, Apple TV is a little bit expensive in comparison to Roku.

2. Is Apple TV worth buying?

Apple TV does have some advanced features over Roku. But the cost of Apple TV is twice that of Roku. So, if you can bear the cost, Apple TV is quite worth buying.